In the third of my monthly features on a Chef that has gripped my imagination or soul, I sit down with Christian Antoine At Chef's Table.

I have a chat with Christian, the head chef at Giornotte, and learn so much about the philosophy behind serving quality dishes here - to be the best. He believes in the product on offer, and this is not just sales talk. He genuinely strives to ensure that he and is team are producing the best dishes from the freshest ingredients. Christian is easy going, accessible and warm. I thank him, and continue my brunch.

These are words from a review I did of Giornotte in May 2014 when I first met Christian Antoine, Giornotte’s Chef de Cuisine at Ritz Carlton, Abu Dhabi. That was the day I started having a  chat with Christian in my head. There was a magnetism about him. Nothing pretentious or superficial – all substance. Genuine, sincere and with a verve for life – his laughter was infectious. The smile, oh the smile. I simply had to have him At Chef’s Table.
.
I start off with Scallops with textured granny Smith apple, bacon dust on a bed of cauliflower mayonnaise. It is a dish that plays around with textures and flavours. Scallops, with a natural delicate sweetness, complement the acidity of the apple. He has chosen an apple that does not dominate the scallops with its own sweetness. He wants that bit of sourness on the plate. The bacon dust brings not only crunchiness and contrast to the scallops in texture, but also flavour in the guise of that ‘bacony’ saltiness, if you will. Finally, the choice of china for the starter brings out another contrast – that of colour. Serving the dish on dark china brings out the white of the scallops, something that would have been lost on the traditional white plate. 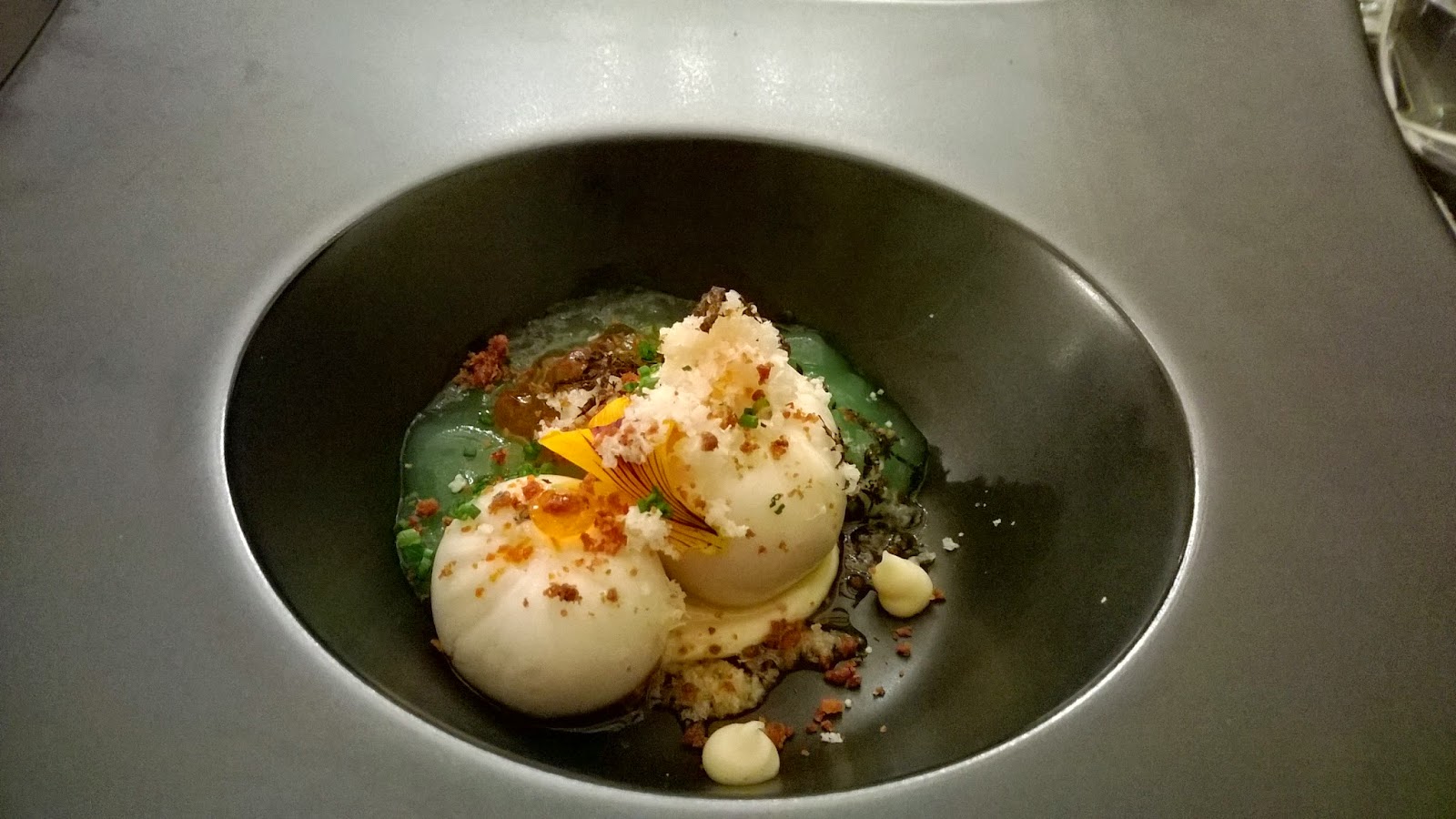 Chef sits back and there is a fondly nostalgic look about him as he reflects on his childhood. There is deep emotion in his words as he talks about growing up under the hand of his mom and aunt.

I listen to him recall his childhood and his special  bond with his mother. It is the story of a mother who epitomized sacrifice so that her son could have a future. He spent his formative years mostly with his aunt because of his mother’s working hours. At an early age he understood the demands of life, and accepted that he could see his mum for a short time every day. While under his aunt’s care, he started making pickles for his neighbours. He was 5 or 6 at the time. A first encounter with making food. He grew up with no real intention of becoming a  chef. “It just happened,” as he puts it. At age 20 he enrolled in Mauritius Hotel School where he met the next influence in his life, Francois Gaucin, where he was trained in classical French cuisine.

In life there are those who play it safe. The thought of death and the non permanence of relationships are threats that live with us every day. But how can we not love? How can the little boy not but love his mother with the intensity that is matched only by the bond between a father and daughter? This comes through as we talk about the influence his mother has had on him. It is no ordinary relationship. The man I see sitting opposite me carries with him some principle influences from his mother and most of them centre on how to treat people and how to live life. Chef  says the values his mother gave him are still with him. They have moulded him into the man and chef that he is. He thinks it essential to respect, respect and respect other people. You in turn will be resected for what you do in this life… 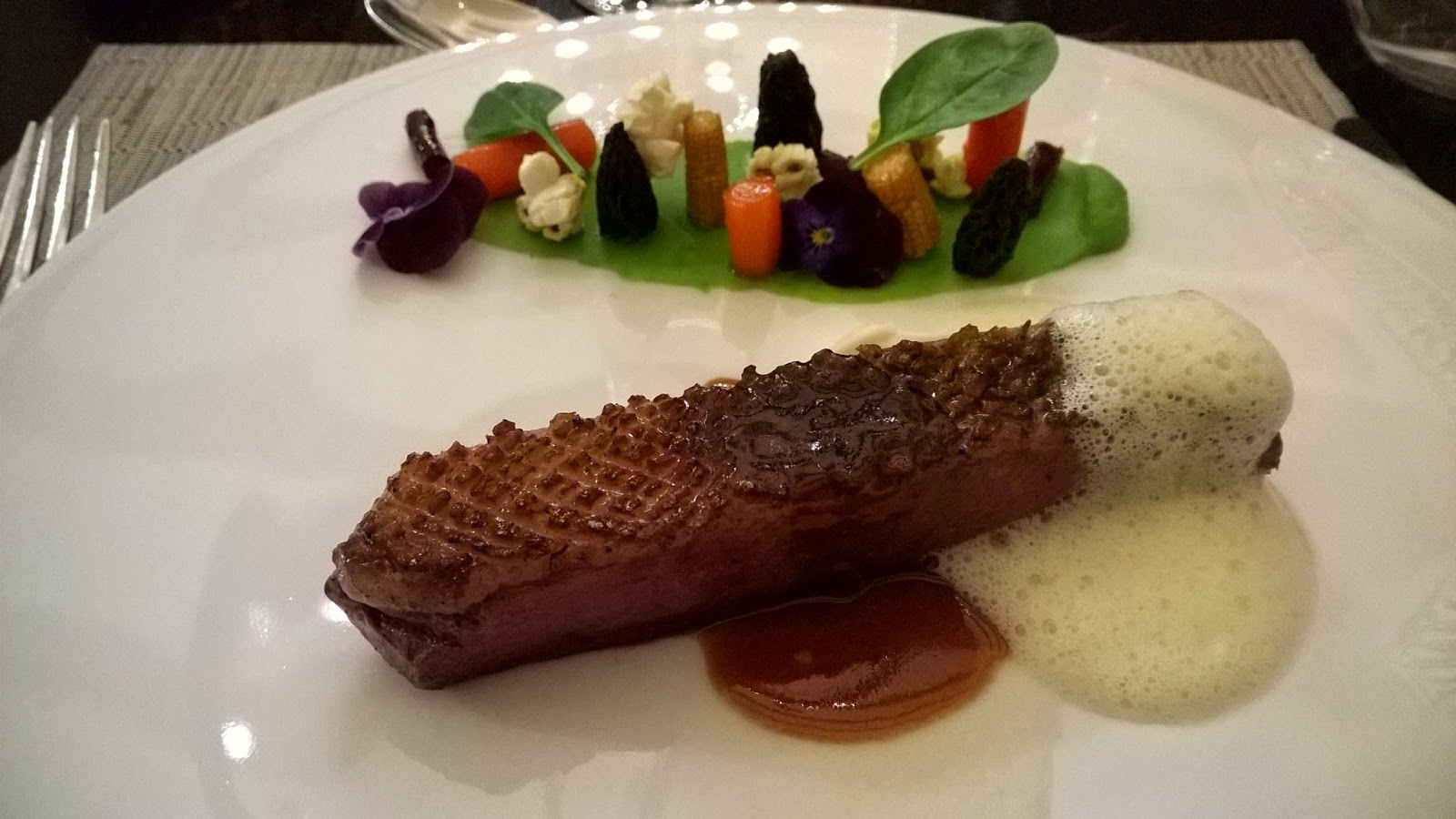 Next up, Chef serves Ode to the duck in ‘Duck in three service’. This excites me personally. I think a chef can really show his skill by cooking the same protein in 3 different ways. It is a pretty dish. The presentation is fine and I am sure it has given Chef immense pleasure in preparing it for it reconnects him, I believe, to his classical training.

The duck is beautifully cooked. There is a rich brown colour, and that skin looks amazing. Baby vegetables – beetroot, carrot, baby corn, celery root to mention a few - stand upright on a bed of pea puree. Why pea puree I ask? The colour he says - he loves cooking with peas because of that beautiful colour it lends to a dish. There is a surprise among the vegetables – popcorn. I am beaming. Chef is one of a couple of chefs I have met who privilege, in word and creation, the importance of memory in the guest’s dining experience. The dish is a celebration of innocence and happiness. Popcorn – childhood, fun fares, movie nights, cinema. How many sad memories do you have of eating popcorn?

It is an apt moment to return to his reflections on childhood. His happiest childhood memory? There is a collage of memories he shares: playing with friends, picking fruit from trees, moments with his mother. These thoughts lead Chef to add that in an ever-changing world of flux and movement, he believes in the permanence and longevity of friendship.

I cut into my duck - Chef has really cooked it perfectly. The knife goes through the lovely skin – the latter not crispy. Duck is notoriously challenging to cook, but as I bite into this, there is a firm, juicy and tenderness about the duck – the way it should be. The orange infused sauce has the right balance of citrus and saltiness, and Chef puts only a little on the duck – I like this. Sauce is often used to mask a poorly cooked piece of meat – not here. This is about that duck! 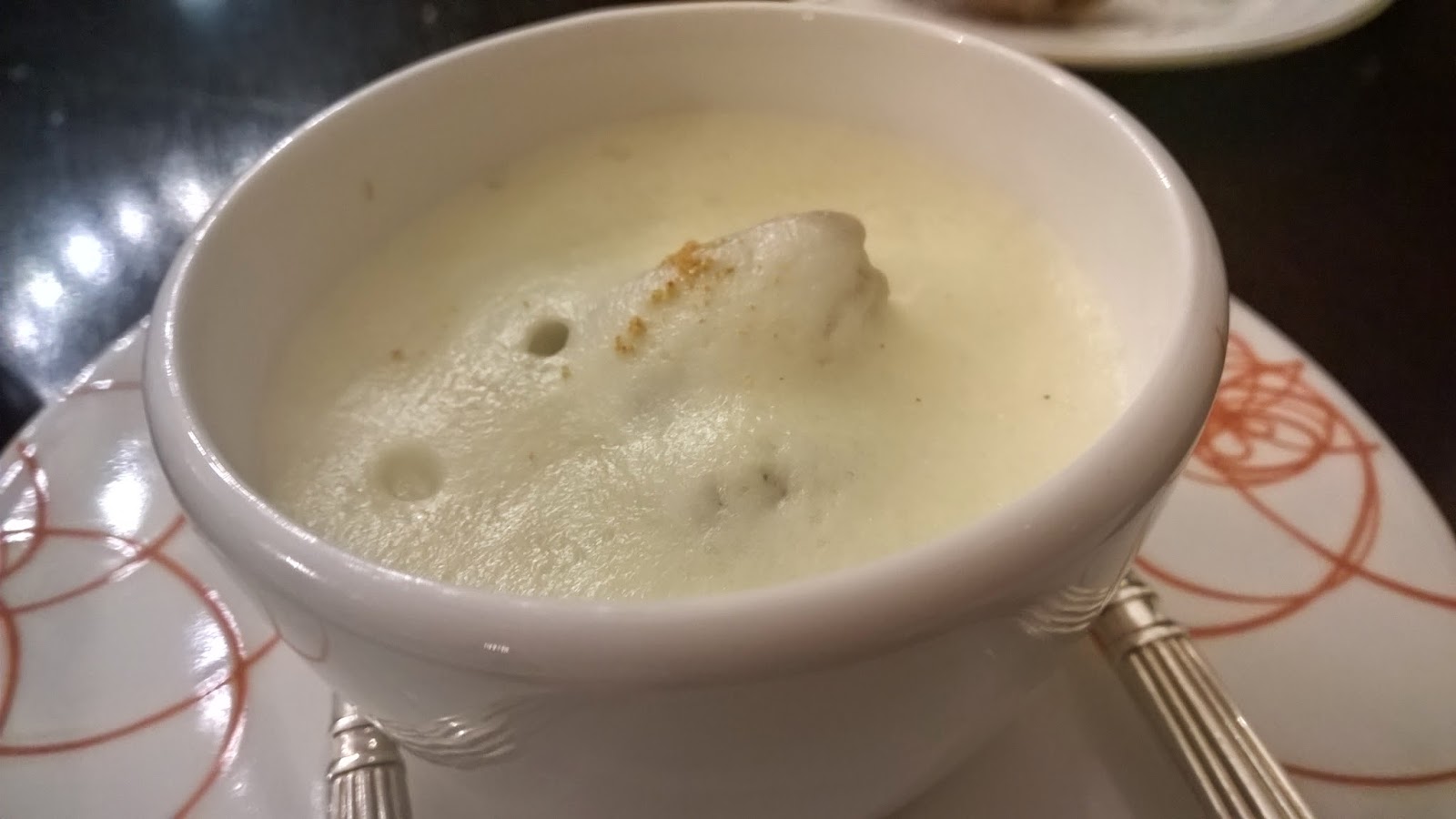 In continuing the duck symphony, I try a seemingly simple dish of Potato espuma with duck gizzard, fondant aubergine ragout. I say simple because after the first duck interpretation, there is no pizazz or visual fireworks to this – it is all about intense flavours. This is more akin to comfort food. Chef recommends taking bread and dipping it in the dish. There is a curry taste underneath that surprises. It’s is an exciting dish because the espuma hides what is underneath. It is homely and hearty!

Finally, as the duck symphony reaches its climax, I am served Foie gras ice cream. The success of this dish occurs on three levels. Everyone loves ice cream, and it in itself evokes memories of happiness, but adding the foie gras flavor brings air of sophistication. Secondly, it has a gorgeous consistency; a lovely marriage between iciness and creaminess. Finally, the balance is perfect. The notion of foie gras and ice cream coming together messes with the brain – already a  challenge, but because of that balance of the sweetness and the foe gras flavor, it works brilliantly. 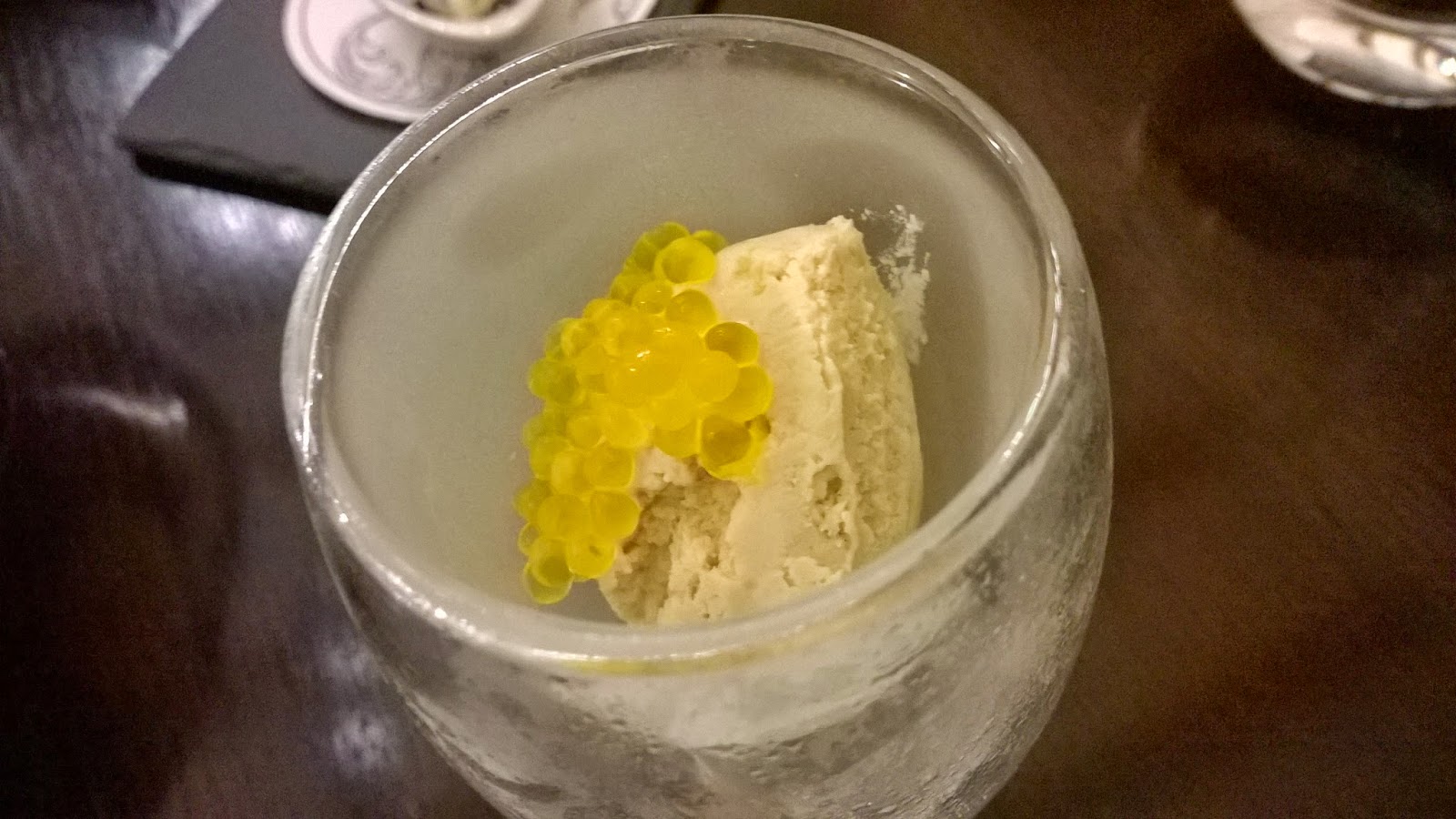 Chef touches on the success of the Giornotte brunch. It was about redefining brunch, he says. When you have a brunch that can cater for up to 500 people in one sitting, as I discovered, it is a logistical challenge to offer something beyond just the buffet. When I tried the brunch last May, I remember the care and time taken to plate the dishes. Listening to Chef now allows me to understand deeper what was happening at that brunch. A fine experience, he says, is about a good product, master technique, excellent presentation and of course a memorable guest experience. In having a brunch with 20-25 live cooking stations he wanted to elevate the experience. In the ensuing months he would be richly rewarded when Timeout Abu Dhabi and What’s On acknowledged the Giornotte Friday Brunch as the best in the city. I remember speaking to him on the phone when the What’s On winner was announced. The little boy in him could not downplay his joy and he shared it with me, natural and uncensored. This was another manifestation of the honesty and display of emotion that pervades his character.

Now, having received accolades for the brunch, where to next I ask him? His answer is simple: He wants to win it again.

What is happiness? I ask Chef. Appreciating the simple things, the seemingly insignificant, ‘unmomentous’ things. These are values he has received from his mother, and as I listen to him, there is a deep love and pride for his mother, who sadly passed away last year. Why do we risk love when losing hurts so much? I recall this line from Sir Richard Attenborough’s biopic based on the life of CS Lewis. Because there is no other way I guess. So while there is still a rawness of emotion in his words, I can sense a celebratory tone too as his mother lives on in the way he lives his life now. Only Chef would know the extent to which his dishes at times are infused with aspects of his mother. 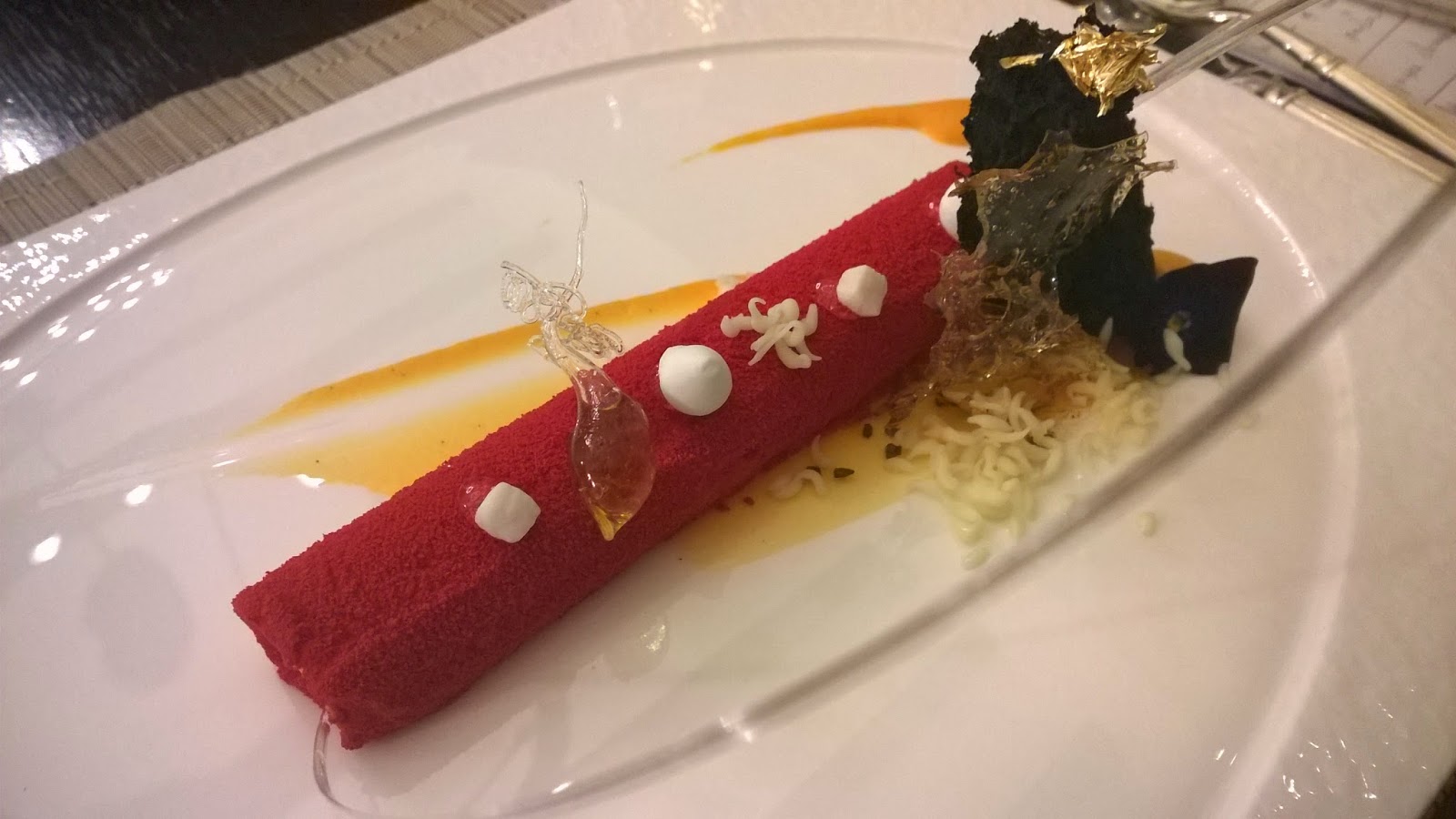 If the foie gras ice cream was, in the words of Chef, about leaving my culinary blinkers at home, the final dish is even more an exponent of that. Pumpkin, Coconut and olive oil symphony is served. It is an exquisite dish. Colourful. Black sponge catches the eye because it is such an unusual colour in a dessert. The edible gold leaf does not escape the eye. Nor does the centre piece, the mousse of olive oil which is coated with a sensuous and evocative red colour. White chocolate pearls, an olive oil capsule and a large sugar ring make their way onto the plate. Then, there is the pumpkin puree! Yes, pumpkin. Wow. The shock value, something Chef enjoys, is obvious here. I crack open the olive oil capsule and allow it to run over the mousse. Balance. Balance. Nicely done. The pumpkin puree and olive oil balance the sweetness on the plate, while its texture serves as a foil for the crunch of the sugar. That mousse is silky smooth, airy and just floats in my mouth. A tour de force of a dessert! 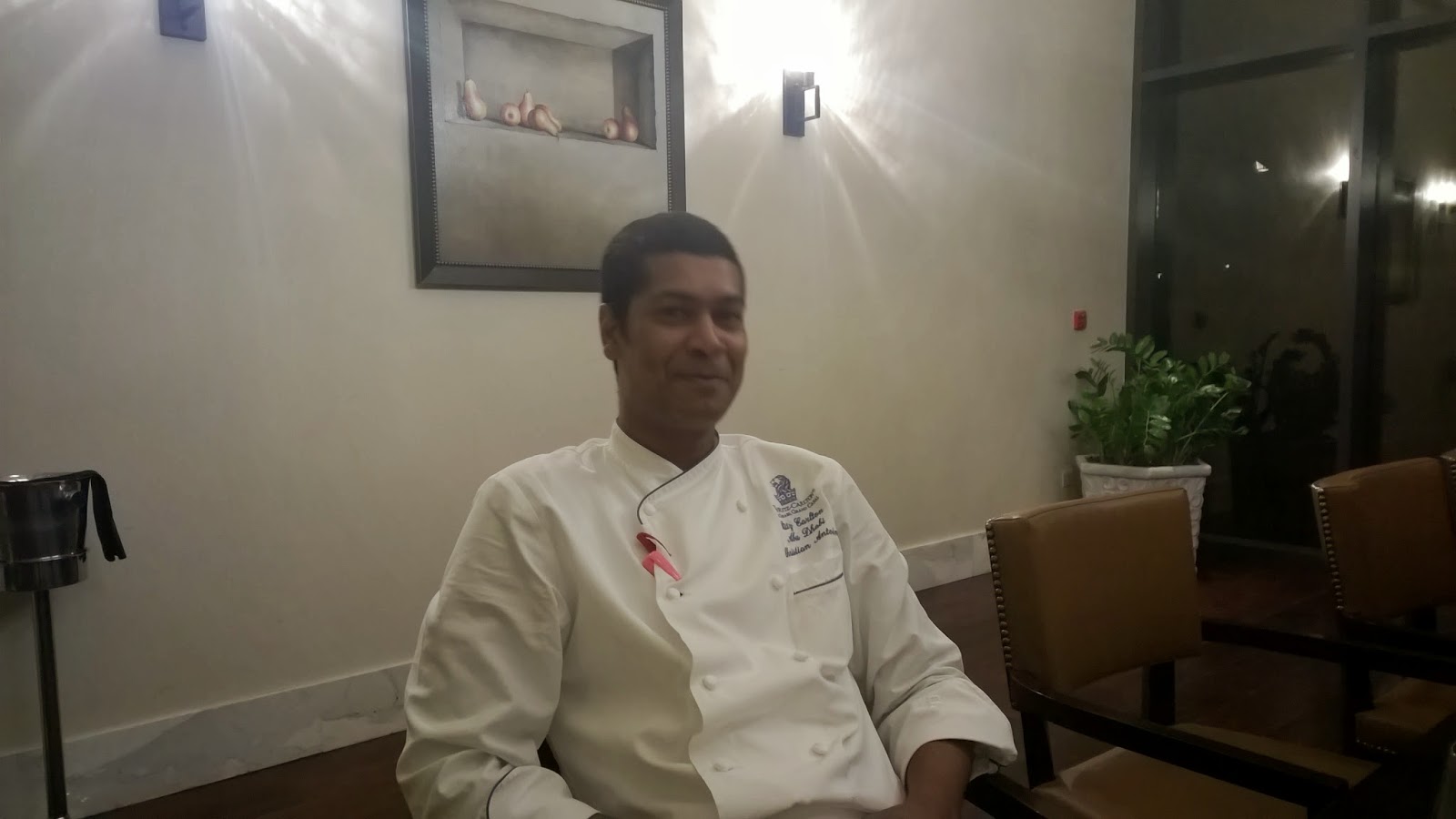 As we finish of our evening with a  cup of coffee,  I think about my own mother’s legacy in me. My thoughts drift to the values she has instilled in me. Those 76 year old hands that have worked so hard over the years. The answer to these questions are fit for another time, but my evening At Chef’s Table has got me thinking along these lines. As Chef continues to inspire his team of chefs and make all day dining soulful and alluring, I imagine his mum, his inspiration, echoing Langston Hughes’ words:

Mother to Son
Well, son, I'll tell you:
Life for me ain't been no crystal stair.
It's had tacks in it,
And splinters,
And boards torn up,
And places with no carpet on the floor—
Bare.
But all the time
I'se been a-climbin' on,
And reachin' landin's,
And turnin' corners,
And sometimes goin' in the dark
Where there ain't been no light.
So, boy, don't you turn back.
Don't you set down on the steps.
'Cause you finds it's kinder hard.
Don't you fall now—
For I'se still goin', honey,
I'se still climbin',
And life for me ain't been no crystal stair