The name Shakespeare evokes so much for me personally: psychologist, interpreter of men and women's thoughts, passion, betrayal, love, murder - he is the greatest writer in the English language. So, when I hear that there is a cafe called Shakespeare Company, I am excited.

However, as you will discover when you go there, there is no connection whatsoever to the name Shakespeare. Hence, when Juliet espouses the virtue of not being concerned with a name when she speaks to Romeo and asks:

What's in a name? that which we call a roseBy any other name would smell as sweet;

I realise that this  is not the case here because the name is everything but is misleading. The decor is not from the Renaissance  The ambience is not either. There are no books. No quotes on the wall. Disappointing. 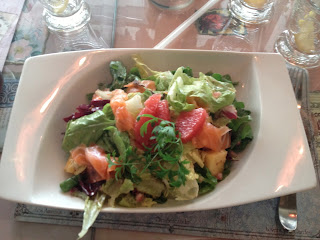 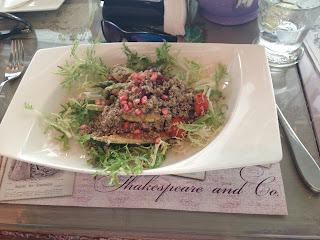 My colleagues and I (16 of us) visited the branch on Muroor Road. We were lead to our table only to find we were put really close to the kitchen, which meant we would have a constant flow of dishes going in either direction. Granted, it was a lunch time meal, but a booking had been made, so in my mind that amounts to extra effort being made because it is such a large table. Not an ideal start at all.

The menu is quite extensive and offers something for everyone. When I hear the word cafe I think salads and sandwiches, although anyone in the mood for something heartier would be happy to find pastas, pizza, beef, crepes, soups,  something from the ocean. In fact, it is hard not to find something for everyone. It is really is a varied menu. I ended up ordering the Salmon salad. Despite my initial misgivings, I was looking forward to the salad. The salad, though, was below expectations. There was no balance whatsoever in terms of tastes because while chef had been liberal in his/her use of lemon, he/she was not so generous with the pomegranate seeds. The lettuce was not crunchy either, reflecting a lack of freshness. On the positive side, everyone around me seemed to be happy with their respective orders. 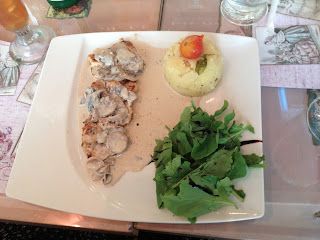 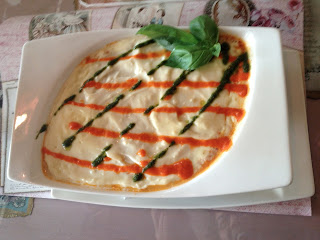 As we were a table of 16, I assumed we would have two dedicated waiters but in the end there was just the one. Gamely as she tried, it was hard. The end result was slow and rushed service. Speak of an antithesis!

Of course one never maligns anything based on one experience  In fairness, I have tried Shakespeare and Company in Central Market, Abu Dhabi and Dubai Mall and they were pleasant overall. Where does that leave you? I think you should try it. While there are numerous other options as far as cafes go, Shakespeare Company, despite its odd and ill-matched decor, is unique and you will certainly remember it exactly because of that decor. Furthermore, my colleagues seemed to enjoy it. So there.  Just bear in mind that if you add dessert, you are looking at anything between Dhs90 and Dhs150, so despite it being a cafe, it can be expensive.