The TRB Group has established itself as the  a leading light in European cuisine in Beijing, offering the city various concepts. However, with my love for fine dining, it made sense that I should try TRB Forbidden City, with its unparalleled views of this iconic cultural landmark. In my mind, fine dining is evolving away from pretentious, over priced dishes to an experience that offers  a balance between a memorable moment, above the ordinary,  balanced with great food and fine service. As I stood outside the non-descript facade of a  restaurant that has consistently been at the top of its game since it opened 8 years ago and looked around, I wondered if the 'easy to walk past' facade would prove to be  metaphor of sorts? 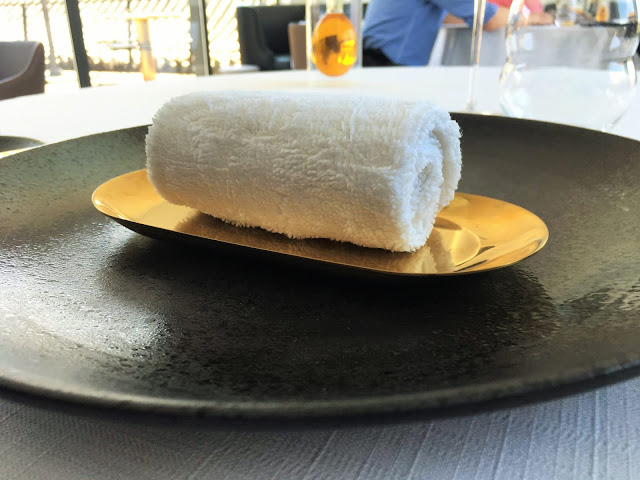 
Less is more. That is as succinct as I can be with the concept. Brunch is essentially a tasting menu, affording you to  a glimpse into the culinary heart of TRB Forbidden City. The set menu starts off with  a couple of canapes and then 4 starters served sharing style. However, as I am dining alone, my dishes are served as individual portions. I do manage to sneak a peek at a nearby table's sharing platter and without giving anyway, kudos to Chef for the plating. This is followed by a  choice of mains and likewise dessert, served individually.  It is a sophisticated brunch, but thanks to staff, it is so relaxed. 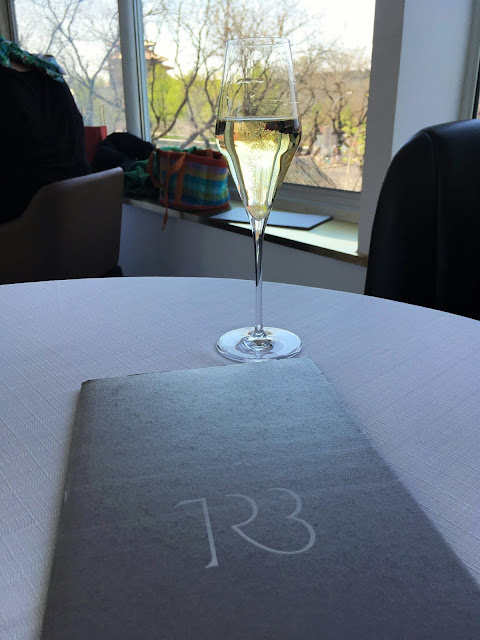 As part of the amuse bouche, the Spring Pea Soup, with bits of bacon offering surprising texture, strikes the right note. Then, the Foie Gras is both playful and clever. The fun element comes into it because unless you had looked at the menu, you would be surprised when you bite into it. It is clever because cherry, with its sweet and sour quality, is actually an excellent combination with foie gras. However, there is more. The shiso leaf, which could be easily overlooked as mere garnish, adds freshness to the this amuse bouch, acting as a foil to the fattiness of the foie gras. This is a dish i would like to see developed into a starter on the restaurant's a la carte menu, if it is not already! 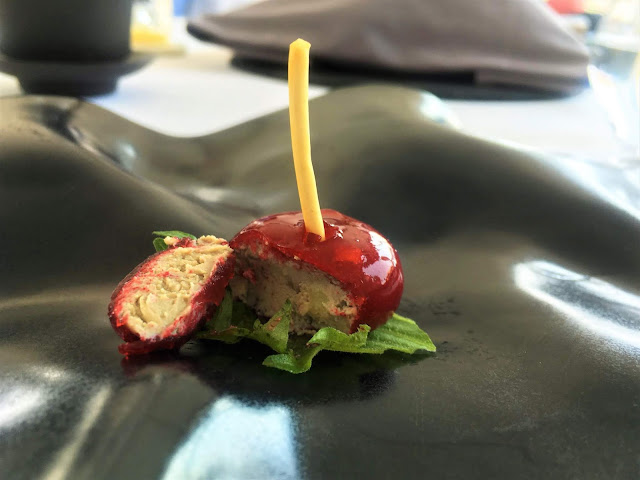 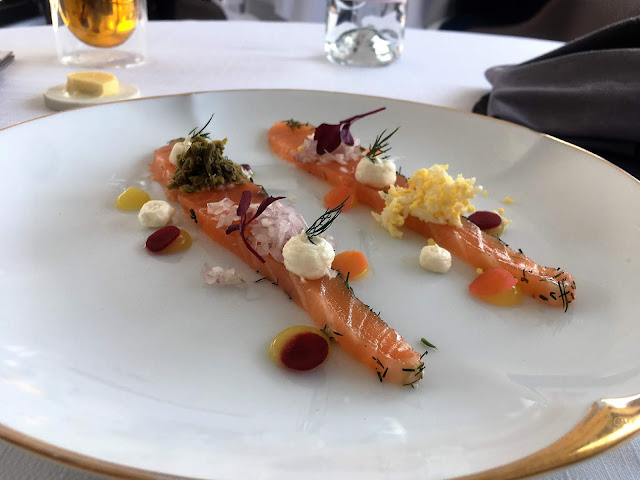 Next, the Gravlax - it is such a classic dish, isn't it? There is a lot happening on that plate, but they all complement the Norwegian salmon. You have that sharp contrast between the capers and the horseradish creme and between the lemon and the dill. After this, there is  a wonderful surprise - French toast. Yes, I had seen it on the menu, but ...you will see when you bite into it. I for one love seeing breakfast items as part of my brunch and on this occasion it also makes me an eager spectator to see how Chef interprets such a homely dish. That homeliness is driven home by the fact that I feel it is something I could make at home, but how does Chef get the outside so crispy while keeping it nice and moist inside? That is why he is the expert! 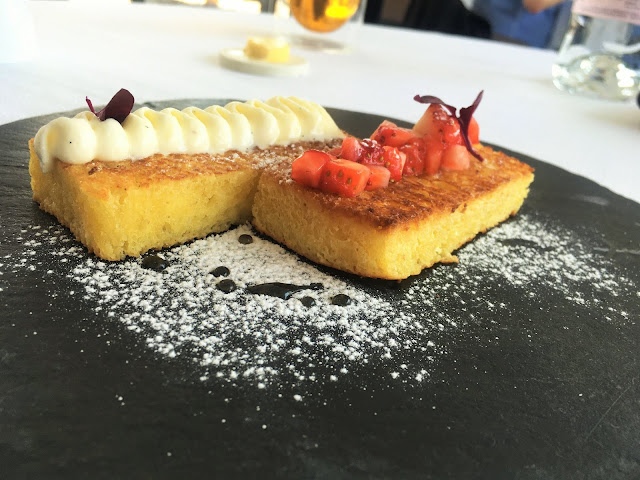 The Lobster cup is another dish I deem to be classic on the menu, especially if you look at the combination of apple and celeriac. I find this to be such a sensuous dish, from the air light lobster spuma with that unmistakable aroma and the textural delight with chunky pieces of Canadian lobster bathing in the celeriac. It is all about the senses.


The final starter, another tribute to breakfast, is TRB's version of an Eggs Benedict, called, Asparagus, Ham, Egg, Hollandaise. As I write this, I recall my feeling as I looked the dish. It was with a childish excitement as I watched it being served. It is about two key ingredients for me - the asparagus is so crunchy while the sauce is just perfect with its consistency. It is often the seemingly simple thing sin life that enchant. This dish is reinforcement of that dictum. 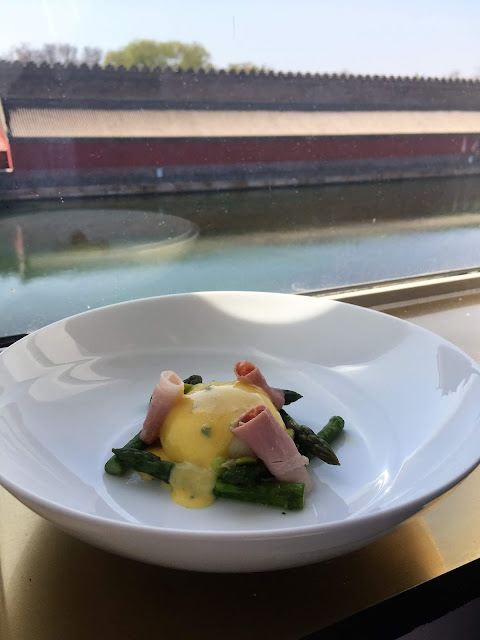 The restaurant boasts an impressive wine list, with very reasonably priced-by -the-glass options. For brunch, there are two packages. Firstly, the sparkling choice is Laurens Le Moulin. The latter is easy drinking and uncomplicated, fresh and with effervescent bubbles.  If you prefer wine, the free flow wines offered are a white,  Domaine Solitis and a red in Domaine Saint - Jacques, both French.  Both packages offer great value. I think the choices offered  more than holds their own as free flow offerings. 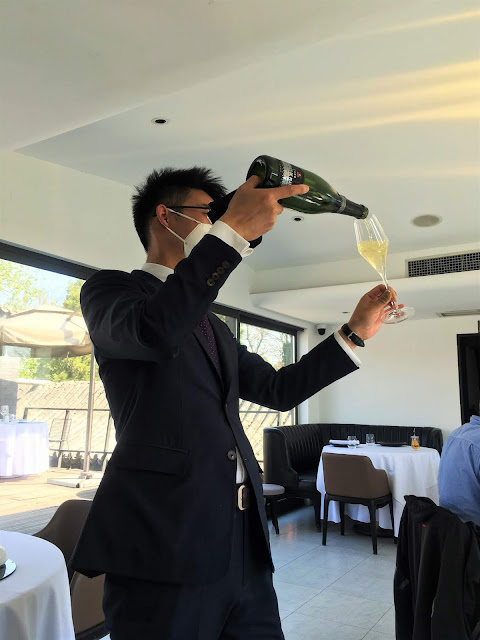 However, the excellent wine list is available and I would certainly recommend enhancing your experience by trying some of the wines. The restaurant boasts about 1000 labels, which while heavily French, have a very good splattering of new world wines. Incidentally, in its short existence, the restaurant has twice been awarded 2 Glasses by the Wine Spectator.  That says a lot about how much it values its wine list. 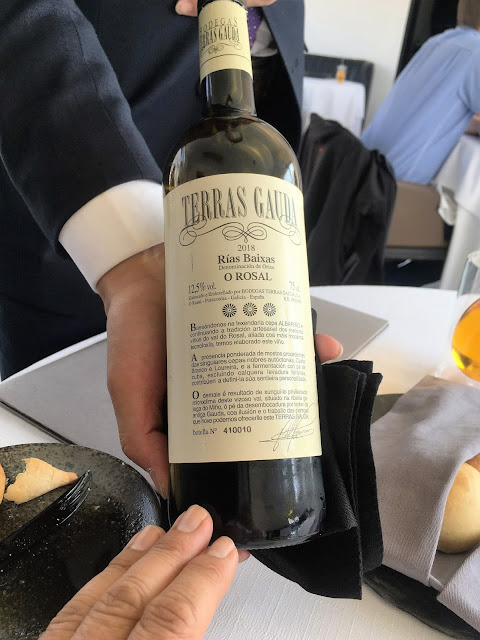 It might be worth forgoing the free flow package and paying a little extra for one of the wines on that list. The Terras Gauda O Rosal turned out to be an impressive Albarino blend. Prepare for a mouth explosion of  orange and lemon with a hint of tropical. I have traditionally loved Sauvignon Blancs for their straightforward fun character. But this Albarino offers much more in complexity and I look forward to having it again.

Next, the Le Fielere Barolo, with its full bodied plum character and soft tannins, proves  a great pairing option for my main course. Decantered, she was simply  beautiful. I would probably recommend decanting at least 10 minutes more though to give it even more time to breathe.

I end my journey, for that is what it was, with a by-the-glass menu option, the Sauternes Madame de Rayne. It excites me almost as much as my personal favourite, the South African Klein Constantia Vin De Constance. Again, it is very well priced  - a recurring motif with the by the glass choices. 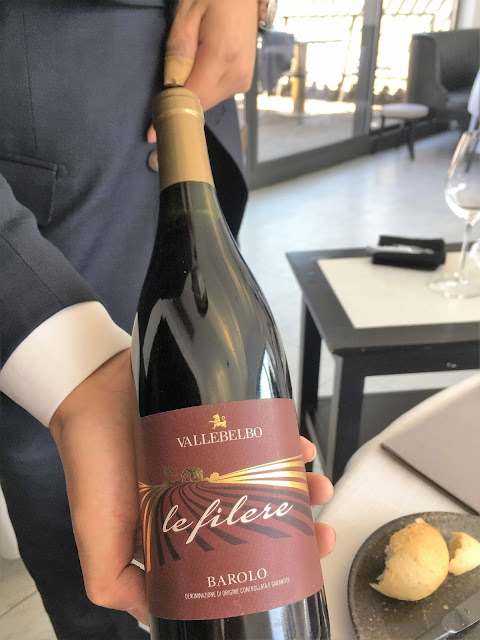 Overall, though, I would say the free flowing options ensure that your brunch is tremendous value, but I feel that on that special occasion,  opting for something on the wine list will elevate your brunch experience even further.


The guests have the pleasure of having Richard, TRB  Events Operation Manager heading up service. As  I interact with Richard, I am reminded again how easy it is to elevate or ruin a dining experience because I am one of those people who would rather have a bad dish served well than the other way around. Yes, service is everything. Richard, with a strong wine background which had him serving as a sommelier  at one  of the group's restaurants earlier, owns the floor, but not in the self assured, arrogant way we as Westerners come to expect based on our experiences.

On the contrary, Richard quietly moves around, topping up drinks without being prompted. The quality I appreciate most about him, though, is his respect not only for the wine itself but also for the ceremony that accompanies it.  Watching him decant  a Vallebelbo Barolo Le-filere, I feel suspended in thought. When he pours the Cava ( available on the drinks wine menu)j, it is another visual reminder of his respect for what he does. 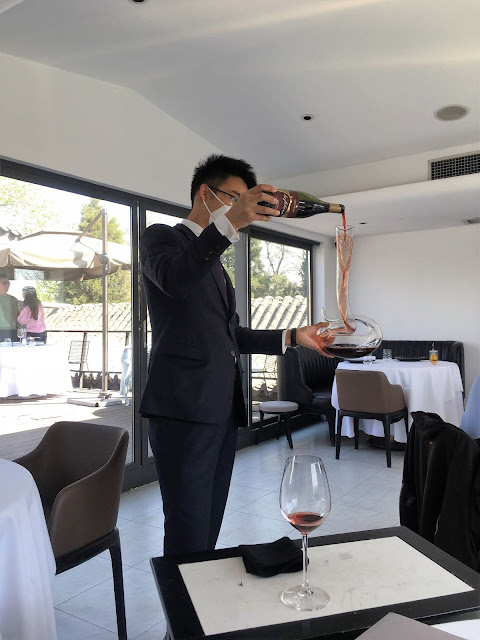 Then of course there is the restaurant's Executive Chef. Again, we are lucky because Chef JFK, as he is called, is on duty. With Executive Chefs generally so busy overseeing many aspects of the kitchen, it is indeed refreshing to have dishes prepared by one with that title. As good as the menu is on the day, it is a dish from the restaurant's a la carte menu that has me enraptured. From the regular menu,  I try the Scallops with Champagne butter sauce. The power of the connection between food and memory is again brought to the fore as Chef takes this classic dish  and pays it the homage it deserves and as I try  it, I am intermediately whisked back to my first scallop dish years ago. It is a credit to the hands that can prepare a dish that can stir up so much emotion. That sauce, served table side, is rich, tasty and smooth, nicely balancing the delicate sweetness on the perfectly cooked scallop. Also,  there is the pea puree that holds it all together - chef has used classic ingredients and executed this dish exquisitely. 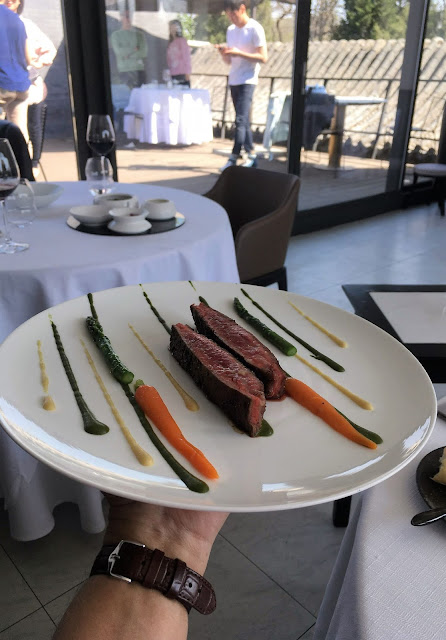 For my main course, I choose the Wagyu Beef  (80g : Sup 70RMB / 160g : Sup 140 RMB) . The Australian Wagyu, with an MB score of 5, was as good a sit looked. This is a dish I would order off the a la carte menu. It is served with truffle sauce on the side, but I believe a good piece of beef should have its own voice, so I left it to speak as it was presented. The plating was absolutely gorgeous! Furthermore, that marbling, a real treat for a brunch, gives the beef so much flavour considering it is MB5. Lastly, decadent garlic and pesto on the plate make the dish both visually exciting but more importantly, add immense flavour if you need something else with your beef. A winner! 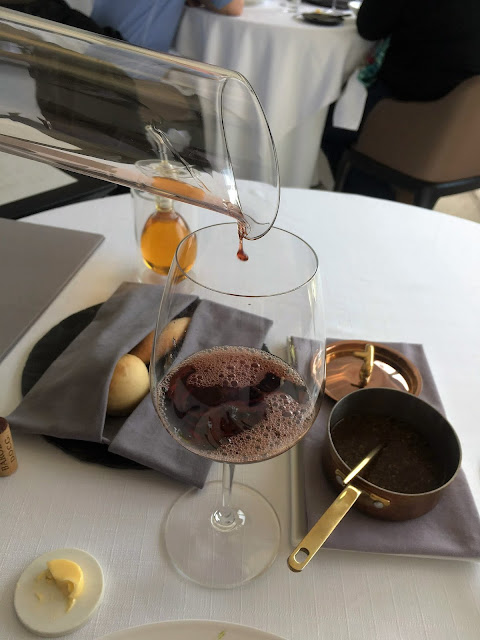 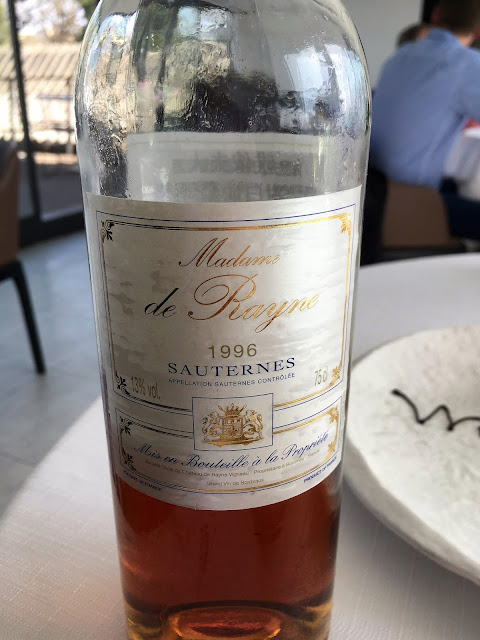 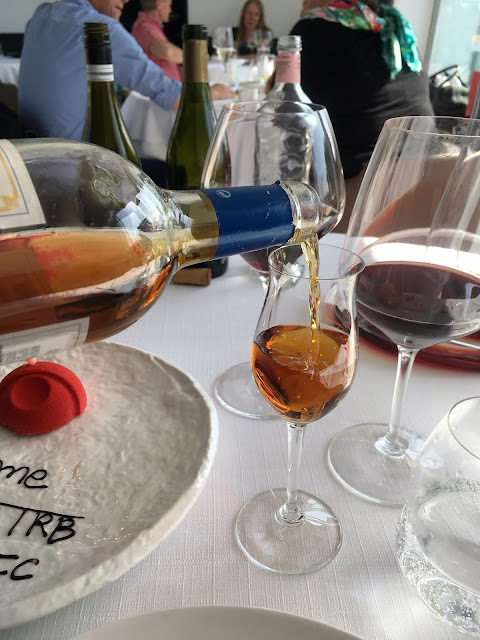 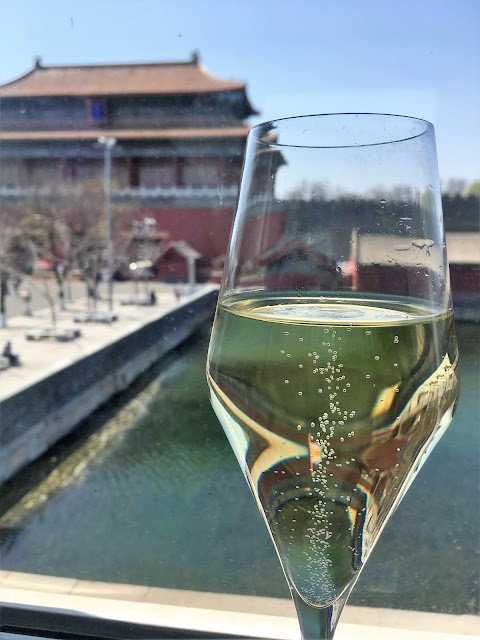 After brunch, I stand outside the restaurant for a moment and recalled an earlier thought - I wonder if the 'easy to walk past' facade would prove to be  metaphor of sorts? Well, indeed it did. The restaurant, with its minimalist interior, parallels the facade and instead allows the hands, plate and glass to express itself. We live in a  time when over-priced restaurants in snazzy uber-cool locations, frequented by hip new moneyed patrons, robbing many restaurants of soul. Thankfully, there are places like TRB Forbidden City that shows what a dining experience is all about. it is about  a Chef who can create dishes that evoke emotions and make us celebrate the moment, connected as it is to a past event. That is what happened to me. It is about  a server respecting service, delivering it attentively but not overbearingly. It is about a server showing respect to wine as he pours it, be that a sparkling or not. It is about a restaurant creating an atmosphere that  feels classy but at the same time allows you to sit back in your chair and relax. All of this  happened to me. TRB Forbidden City. 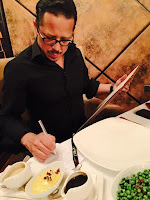