Pays de Loire de la Loire, with its setting along the Atlantic coast, is well known for its fine seafood. In fact, many regard its seafood as the best in France. Seafood is just one aspect of the Western region of France that is celebrated at Le Beaujolais from September 14-27. I was lucky to preview the menu. 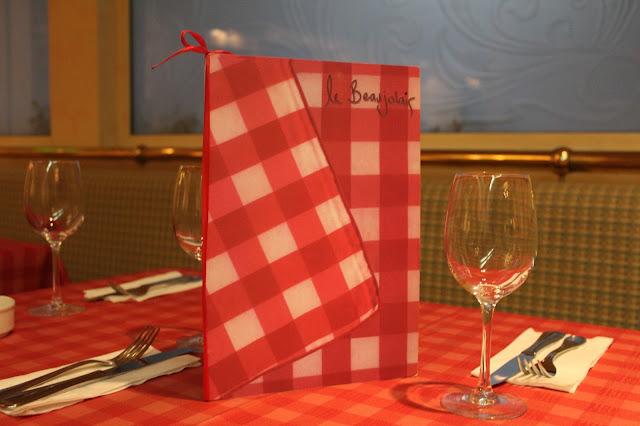 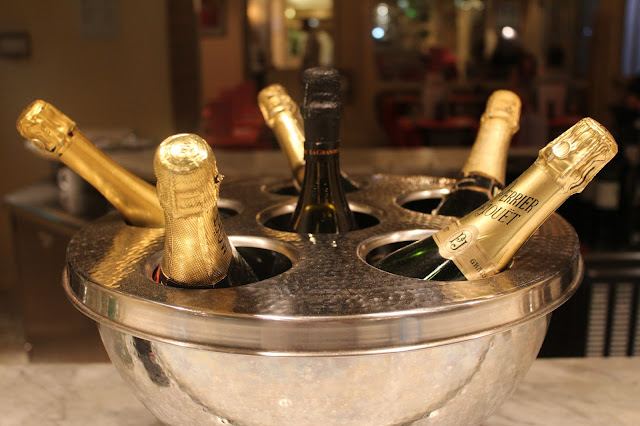 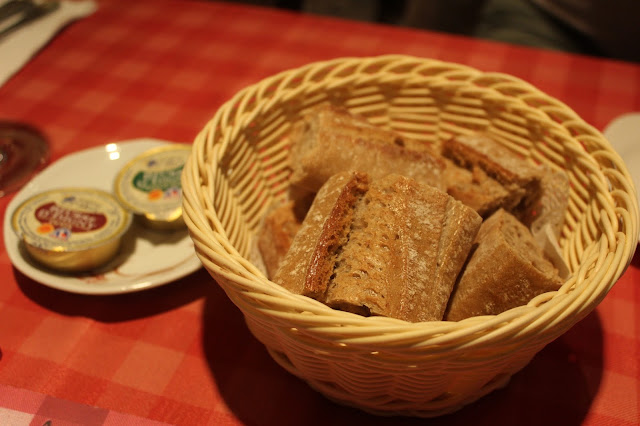 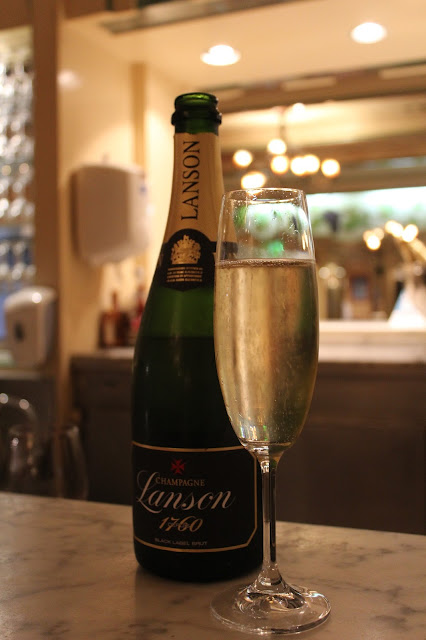 We start off with Artichoke cream soup with prawns. It is a real soup. Sometimes when a vegetable is blended and blended so that it becomes super smooth, there is something unnatural about it. Don't get me wrong. I marvel at how a chef can take a vegetable and get it super smooth. However, sometimes I also want  a soup that my mother could have made. It has that homeliness about it. This is what the Artichoke soup is like. Not surprisingly, there is a seafood element to it, whole shrimps, recognizing the value of seafood to Pays de la Loire. 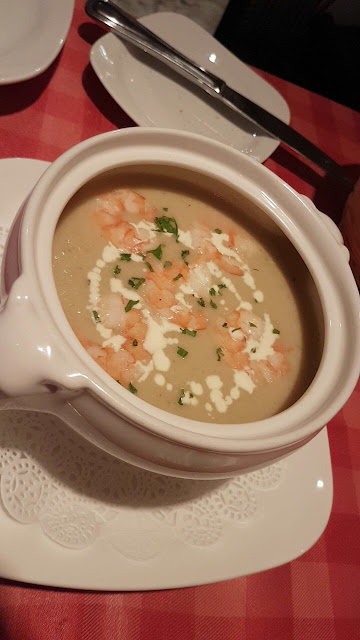 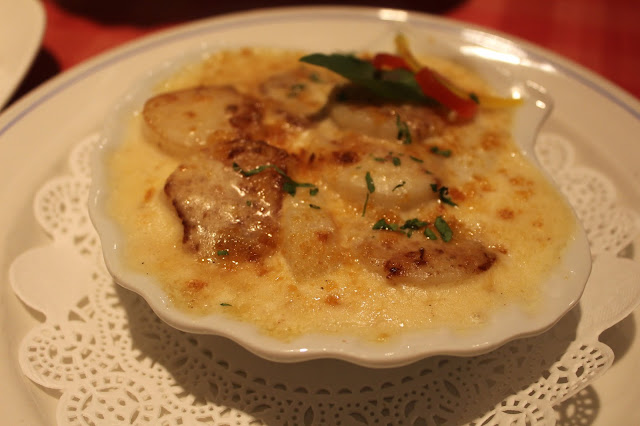 My guest and I then share our second starter, Gratinated sea scallop in creamy white wine sauce. Instead of bread crumbs, Chef uses corn flakes, which gives the dish extra texture. Another cornerstone of Pays de la Loire is the white wine and butter sauce, or Beure blanc, which is absolutely delicious. Make sure you have some baguette and dip it in the sauce. 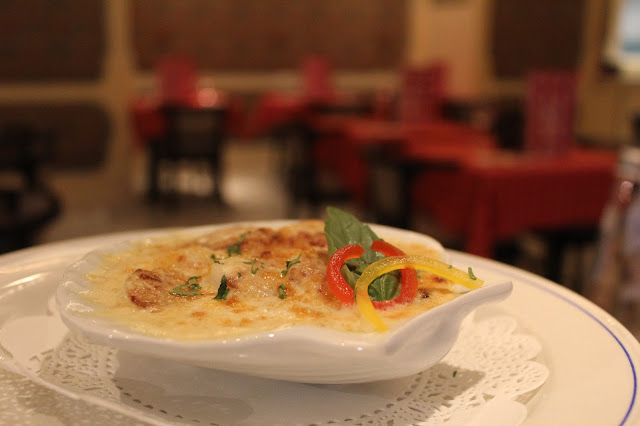 As I wait for our main courses, I think about how people often talk about the lack of charming restaurants in the city. By charming I mean that little restaurant that has been around forever and is a bit of an institution. By charming I mean the type of restaurant where you can drop in for  a hearty meal and cheap glass of wine. The kind of restaurant that has reglars visiting once a week. The type pf restaurant where people have also been around  for a long time. Well, when you meet Buddy and Reda, you realise this is exactly why Le Beaujolais is that charming restaurant talked about above. Between them, they have served at the restaurant for 38 years, surely some sort of milestone. They are as much a part of this restaurant as the original walls that still stand... 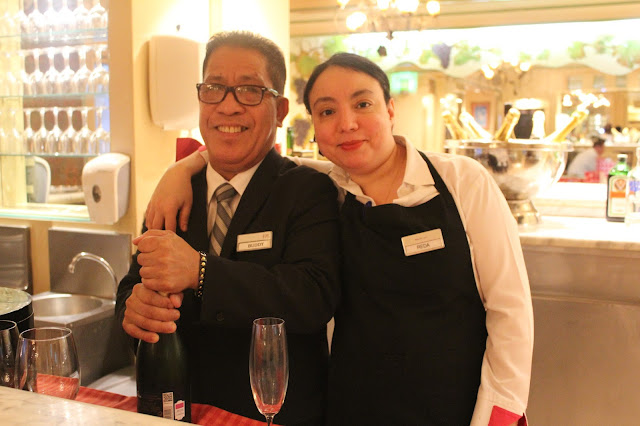 My reflections are interrupted as our two main dishes are served. salmon is an ingredient that is popular in Pays de La Loire, so appropriately, my guest and I order two salmon dishes. First, the Marinated salmon with olive oil and lemon shows how simplicity of seasoning can highlight the inherent qualities of an ingredient. The salmon, admittedly a bit thick instead of having a  carpaccio-like cut, has been rolled in shallots, olive oil and lemon - although, listening to Chef Omar, the process in which he brought together the lemon and olive oil makes me appreciate the dish even more. You will too! I Enjoy it with a glass of Laroche Petit Chablis 2015, incidentally, the same white I had on my last visit. 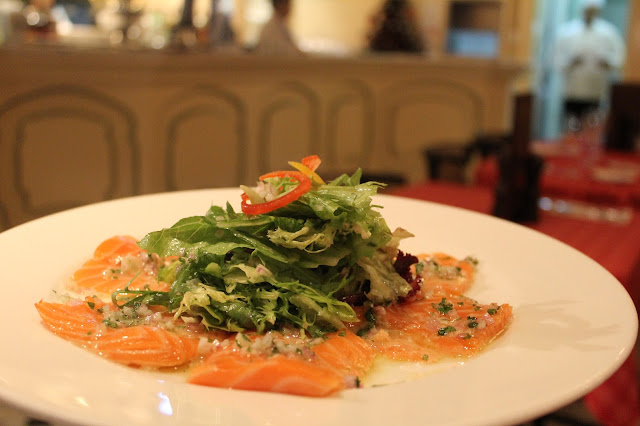 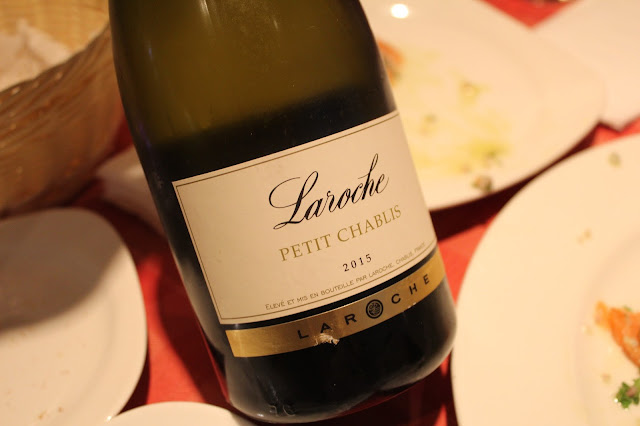 Finally, we have what turns out to be my favourite dish of the night, Stuffed cabbage with salmon and saffron sauce. I have several thoughts as the dish is served. It is a visual delight, with the green and orange of the broccoli and carrots juxtaposed by the incredible saffron yellow of the sauce. Also, there is a homeliness about the dish - homeliness is a word I have used many times to describe dishes at this restaurant. It is for a reason. I try the salmon, steamed in cabbage leave, and the crunch of the cabbage leaf is inevitable. The salmon, beautifully done the way salmon should be done, more medium than medium rare, means the contrasts in textures cannot be ignored. But more than that, I love the salmon done this way. It is no where near dry! 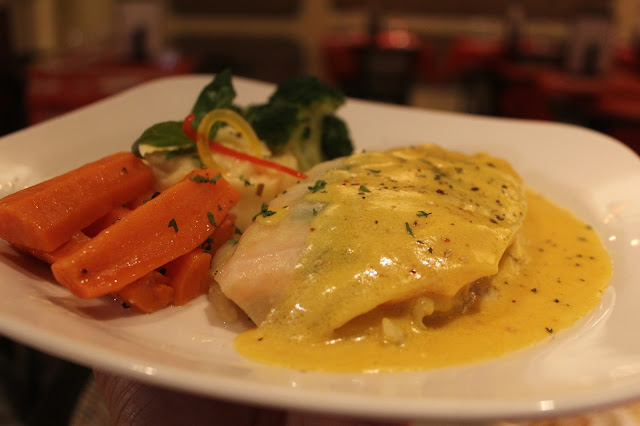 Finally, dessert is a choice of two  - Rock melon soup with raspberries and Fresh fruits crumble. The former is simple, with fresh melon pieces in a cold 'soup' while the latter is a bit more interesting. The crumble is nicely textured with a  generous amount of  raspberries providing a real sourness to the dessert.  Sweet toothed people may prefer vanilla ice cream on the side to balance the sourness, but then again, those who prefer a more sophisticated taste in their dessert, will enjoy it as is. 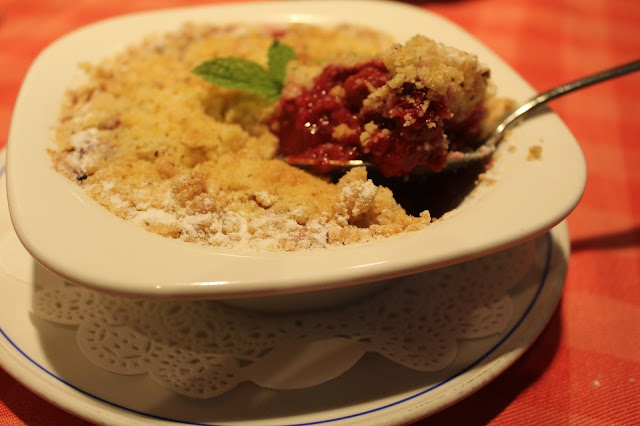 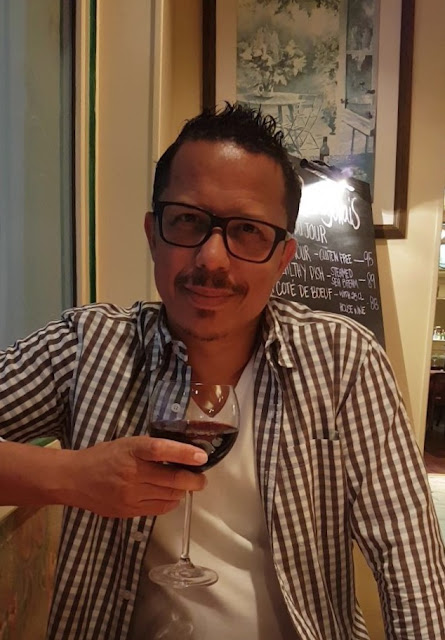 Once again Le Beaujolais has shown why it is  a sure thing. It is so consistent.  On any night you will find  a steady flow of French visitors and while I endorse this restaurant, they know so much more than I do about French cuisine. Buddy and Reda bring to this restaurant what no other restaurant that is licensed can offer guests - a perspective on the past and an understanding of how life has developed here. But over and above them, there are two chefs who have been with the restaurant for more than 10 years between the two of them. Executive Chef Philippe Garcon and Chef de Cuisine Omar have come up with and m executed a menu that represents two of the best aspects of Pays de La Loire but have, as in previous promotions, kept the quintessence of Le Beaujolais. Finally, prices are low, again in keeping with the climate in the city. Value for money is assured.


Average price for 2 people incl a glass of wine - 350AED

Disclaimer: I was invited to try the  Pays de La Loire Menu courtesy of the restaurant