My love affair with Le Beaujolais, the authentic French bistro at the Mercure Centre Hotel in Abu Dhabi continues. Having recently experienced their Foie Gras Festival,  Foie Gras Festival  during which the restaurant really confirmed itself as a place of real authenticity, I had no hesitation in trying their Provencal Week. Not only was I excited about an approach to French cuisine that fits so well into Le Beaujolais's  fabric. It was also an opportunity to have dishes made by Michelin-starred Xavier Mathieu. It is not often that a chef featured in the 2016 Michelin Guide visits Abu Dhabi. 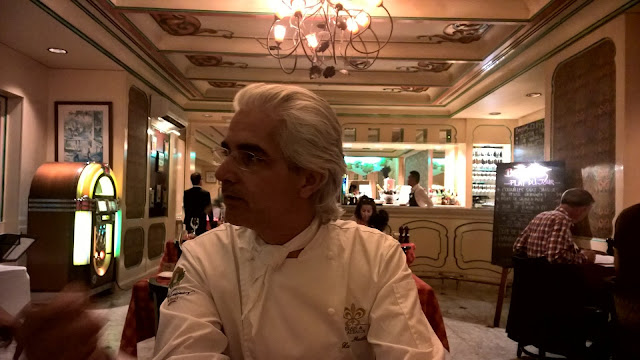 I have the pleasure of sitting with Chef before he gets stuck in in the kitchen. For someone who just landed from Paris, he is alert and easily engaged as I chat to him. I have many questions of course, but mindful of his time and that he is needed in the kitchen, I ask only a few questions. I ask him what the dishes he is putting out represent to him and he talks glowingly about their connection to his childhood. Chef, who runs his Michelin-starred Resaurant Xavier MATHIEU in Gordes, France,  feels the dishes take him back to his origins in Provence. They are full of memories,a classic motif in a chef who privileges the relationship between food and memory. He is excited, and his eyes light up as he mentions that these dishes are becoming popular again. This is understandable as there was going to be an inevitable backlash in certain quarters to the scientific influence that some restaurants have embraced in the last 15 years especially. 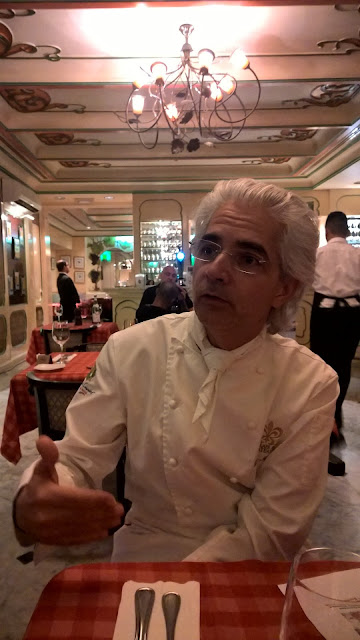 I ask Chef to pick out a dish that he is particularly connected to - It is an unfair question I know. But I try nonetheless. He chooses a few. First, he mentions the Stuffed baby vegetables and flavoured salad. When it is served, I notice how uncomplicated it is. It is about the elements. The vegetables themselves have so much of their crunch left that I can be forgiven for thinking they were freshly picked and stuffed. Of course, this is Abu Dhabi where fresh produce and precise ingredients are not always the best, but the dish gives me a glimpse into chef's respect for memory. 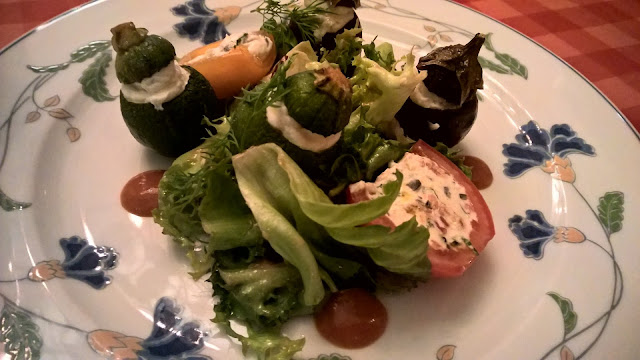 Having taken a peek at his menu at his restaurant back home, I noticed that the la soupe au pistou has been a permanent element in his menu. It is also one of the dishes that was a firm favourite when he was young. Tonight it is a basil soup, with green vegetables taking a  prominent role in the dish, but   second to basil, which wafts up to the nose as the soup is poured. Actually, I am surprised by the dish, as I was expecting a creamy basil soup, and I am sure 99 out of 100 guests would be too. A thin layer of cheese around some vegetables provide the mild  creaminess in this dish, while the rest are just bite and crunch, all held together by the intoxicating aroma of basil. Simple but intense - that is my judgement of the soup. 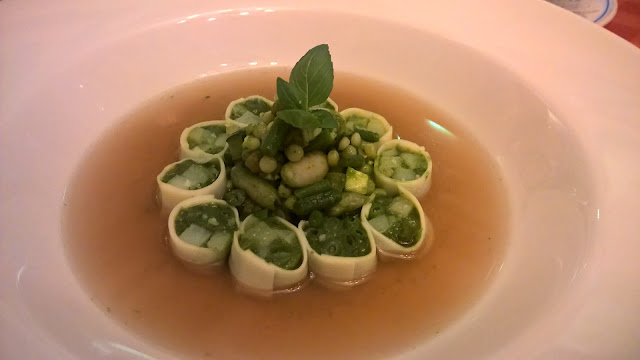 Next, Chef lets me try the Olive oil puree of salty cod fish with leeks. The puree is puffy, like putting heavy air in my mouth while revealing a saltiness that at first might seem overpowering, but then leek and cubes of beetroot jelly bring some balance. This is  a sumptuous, sexy dish and I want more! It really is about three things - that puree, beetroot and of course, the nicely cooked cod, all coming together in a  simple looking dish that bursts with contrasting flavours and textures. 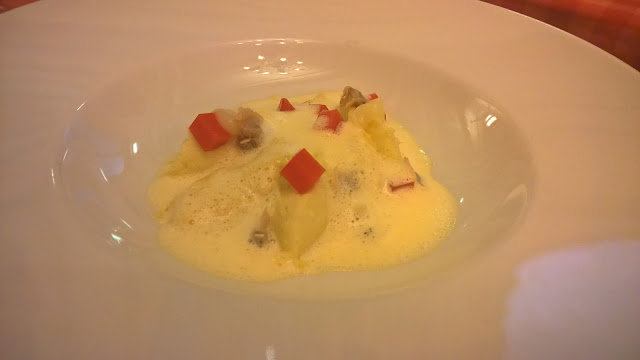 Next, I ask Chef about his favourite champagne. I know it is a cliche asking a  French chef this question, but I really want to know. He talks at length about some of the excellent champagnes out there, but he says the Ruinart Blanc de Blancs is his favourite. Goosebumps. It is one of two inseparable favourites of mine - the aforementioned and the Billecart-Salmon Rosé. How cool, I think to myself. With time for one last question, I think about my daughter and I try to imagine what question she would have asked him were she here tonight. It comes to me.  What would he say to a young person with a passion for cooking with an eye on becoming a chef, I ask. his comment is succinct - Never give up, even when  a dish does not work the first time. Try again, and again. It is something you should practise every day, he says. 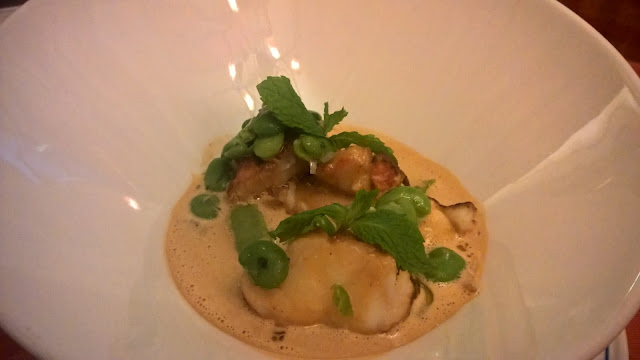 As Chef gets up to go to the kitchen, I am served the Lobster casolette with broad beans and fresh mint in Nantua sauce. It is remarkable what mint can do to a dish. The mint infuses that dish with a freshness that seems so obvious and yet this is a combination I have seldom seen here in Abu Dhabi. Make sure to ask for extra baguette slices because the Nantua sauce is one of those sauces you want to lap up with a piece of bread and start again and again. 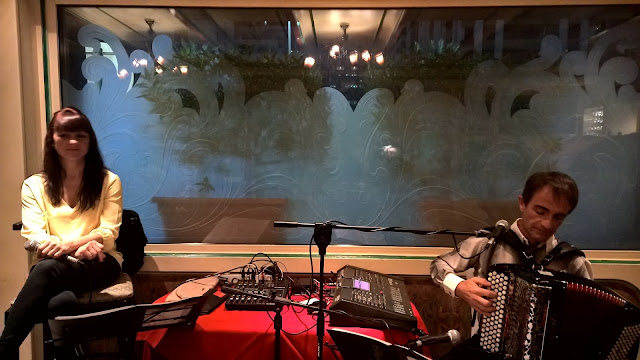 The Provence promotion, which runs until November 24, is not just about food, though. Music is provided by the French duo, Michel Delpech & Virginie. They have been coming to Le Beaujolais for many years now at this time and New Year, so regulars will be familiar with his accordion playing and her sultry voice. I tell you, the authentic feeling I have as I listen to them, while French guest after French guest arrives, is unparalleled in the city. 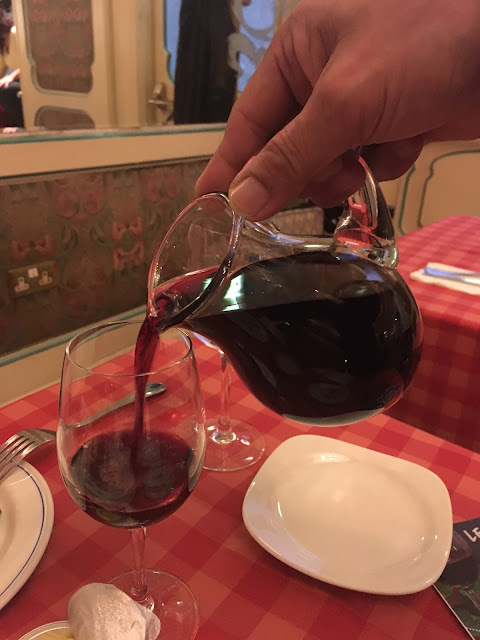 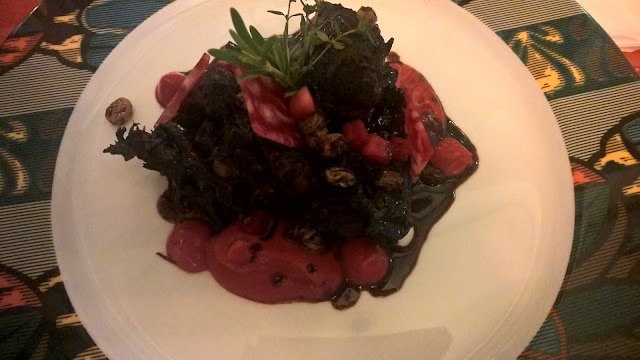 Next up, I try a duo of dishes - the Oxtail and beef cheek Provencal with 'maturi' sauce and beetroot mustard and one of Chef's other special dishes that takes him back in time, Stuffed lamb tripes and lambfeet Marseilles style. The oxtail and beef cheek  has an intense jus that is beautifully countered by the deep pink beetroot mustard. Finally, the stuffed lamb, one of Chef's favourites, has some ingredients that are so typically Provence! While the tripe and lamb feet will be a challenge for non-French guests, I enjoyed it, mainly because it also connected me to my childhood in South Africa where my mum used these when she made some dishes when I was around 8. 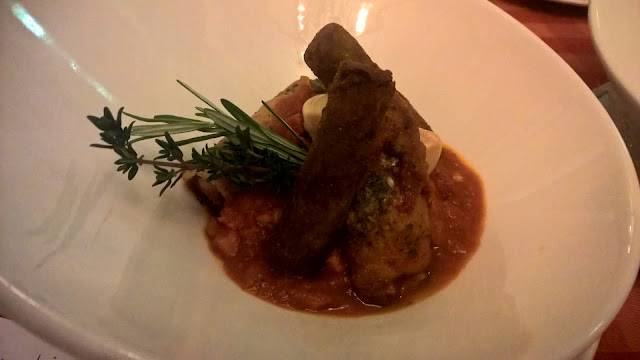 For dessert, I have the Melon carpaccio - a perfect dessert for spring! Carpaccio like slices of melon with rose water and anise sorbet. It is a stunning dessert that screams freshness! 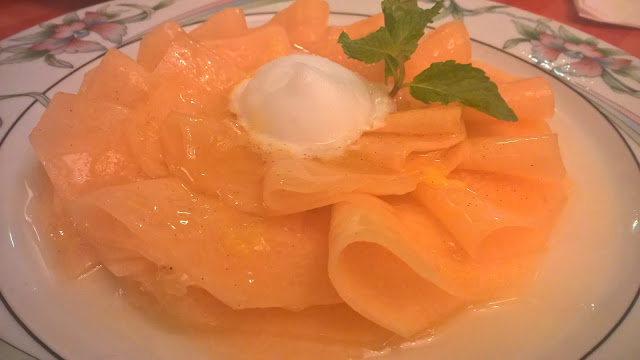 At the end of dinner, I reflect on what Chef Xavier Mathieu has brought to us on this visit. Of course, there could have been no fitting venue than Le Beaujolais, with a simplicity at its core. He is a chef that understands the restaurant's ethos, allowing his dishes to fit in so easily. Earlier I asked Chef how people could identify his dishes. In other words, what sets his dishes apart? He said that guests with a certain sensibility and sensitivity will be able to pick up the subtle nuances of his dishes. His dishes are imbued with a sensitivity picked up by like-minded diners. That is certainly what I felt this evening. There is an emotional connection to his dishes if you arrive with more than your palate open. Provencal week, another concept cementing this restaurant's place as the most authentic French experience in the city.

Disclaimer: I was invited to try the Provencal Week courtesy of the restaurant