When I was invited to go to Tehran to do some English language assessments, I responded with a resounding YES, unaware of the visa requirements and how long it would all take. A week later I was at Dubai International Airport at the check-in counter. But like Pip in Dickens' Great Expectations who feared that something would prevent him from going to London, I kept thinking that an issue would intervene, thwarting this surreality before me. Yes, surreal. Would that not be your feeling? How many times has it happened to you where someone called you up and asked you if you could go to such an evocative country as Iran? 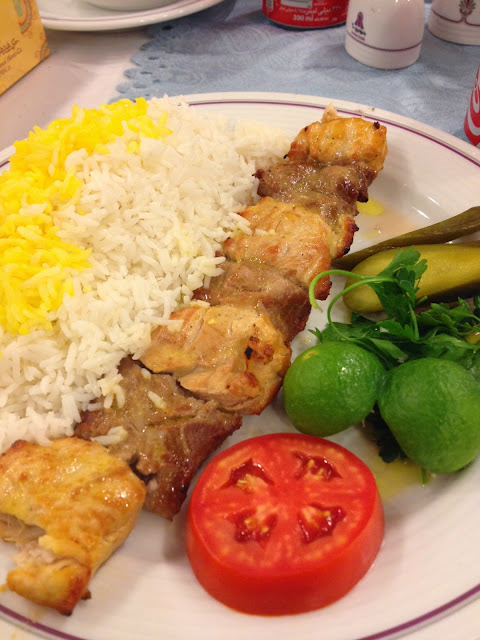 At check-in, with no visa in hand, I am predictably asked about it. I figured if I confidently answered it was to be given on arrival, the agent would let it go. (After all, I had been assured, despite contradicting information from my Embassy, that I would get a visa on arrival). He consulted with his superior for what seemed like three hours. It worked. Everything was sorted and I cleared immigration.


I boarded the Mahan Air Boeing 747-300, a 28 year old plane. That age in itself means nothing if maintenance is routinely done, but still, I prefer new planes when I fly. There is something charming, old school, about the plane, but the flight attendants are very diligent about doing safety checks. I can relax.

I like airline food. I always have. And I am a seasoned Y-class traveller. I know it is fashionable to disparage airline food. It is what it is - a functional meal at 37 000 ft. However, I chuckle when I hear the flight attendant ask me 'Chicken or beef?'. That is the old charm I referred to earlier. It is such a classic line from airlines is it not? I have become accustomed over the years to having a choice of 3 meals (Qatar Airways my most used airline here). Anyway, I have the beef with saffron rice which I do not actually mind.


I look at the flight attendants and reflect on the dignified and professional manner they go about everything. They are never going  to work for airlines like Singapore Airlines, but they do their tasks well. There is a contentment in them. It makes me think about how people are motivated and that even in lowly airlines, hotels and restaurants, there should always be a commitment to excellence. My musings are interrupted by the captain who speaks for 3 minutes. The volume is so low I can't make out what he is saying. I hope that he was not telling us to get ready for a water landing because then I would have heard nothing!

Two hours later, we land at Tehran Imam Khomeini International Airport. It is fascinating how everything happens in stages, and when we pass one stage, we anxiously await the next. Would there be someone with my name in print on a board, just as promised? Yes. Relief. I am shown to the, wait for it, CIP lounge - Commercial Important People Lounge. That is what it is called. In fact, adjacent to the airport they are building a dedicated CIP building. I sit in the lounge as a very personable, kind and welcoming man who clearly has a lot of sway,  sits in his chair - much like Coppola's Godfather - and makes a few calls. Visa sorted out! I thank him.
The drive to the hotel is dreamlike. It is reminiscent of my visit to central China's Henan province in 2002 - the cars, the roads, the landscape. I enjoyed the changing landscape as we moved from sand, to low houses to green. There is a lot of green - natural green. I soon see the effect of sanctions on Iran, with a mere smattering of foreign cars, mainly locally manufactured French cars.  Quite bizarre to see so few Japanese cars. In 4 days I count 10! I see half-completed buildings around the city as I approach my hotel, but I look at the Iranian faces and see dignity and pride. You would not say, looking at the faces, that they remain victims of incredibly harsh sanctions that reflect cruel double standards by the UN.


At the hotel, I remain tentative with taking pictures. It is a feeling I had from the time I boarded the plane. I guess it is about de-demonising this fascinating country. All the CNN and BBC- lead vitriol I had been exposed to has left me with a big task of breaking free of these propagandist ideas. I start to take pictures. Later I chat to a waiter at the restaurant. It is early days yet, but Shakespeare's Shylock from The Merchant of Venice  makes his way into my head:

If you prick us, do we not bleed?


if you tickle us, do we not laugh? if you poison


revenge? If we are like you in the rest, we will


resemble you in that..

This would become a recurring thought in my head over the next 4 days.

My time, sadly, is limited. I am busy 7-8 hours a day, leaving me exhausted. But in the meantime I have the good fortune of interacting with so many local people from all over Iran. It is a most wonderful feeling when you experience Shylock's words quoted above. I meet someone who is passionate about Michael Jackson's music. Another loves cooking. A few of them express their reasons for wanting to leave. Others express motivation for wanting to stay. I am surprised by the openness with which they express their opinions on every possible issue. I soon realise that these are people of immeasurable substance. This is not a place for TS Eliot's "Hollow Men" or 'lonely men in shirt-sleeves, leaning out of windows?…' to be found in Prufrock. It is so refreshing to come across such depth in honest, every-day people. 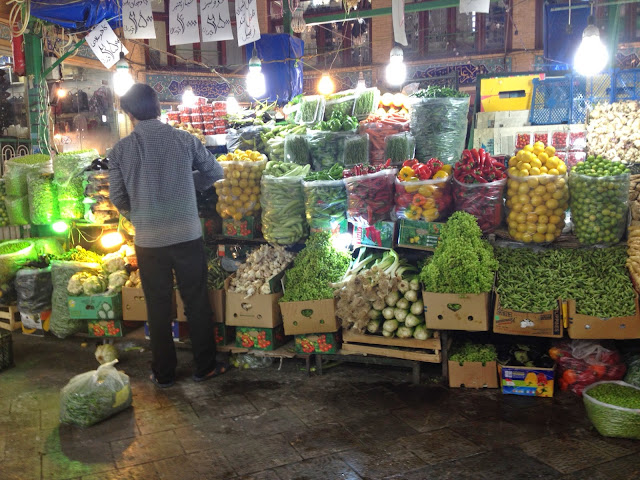 On a rare occasion when I have free time to explore, I take a taxi to the  downtown area. The traffic is, as everyone who has been to Tehran knows, hell. There are no clearly designated lanes at times, but miraculously, everything works. You wait to see the crash or hear the crunching metal and screeching brakes - but they never come! 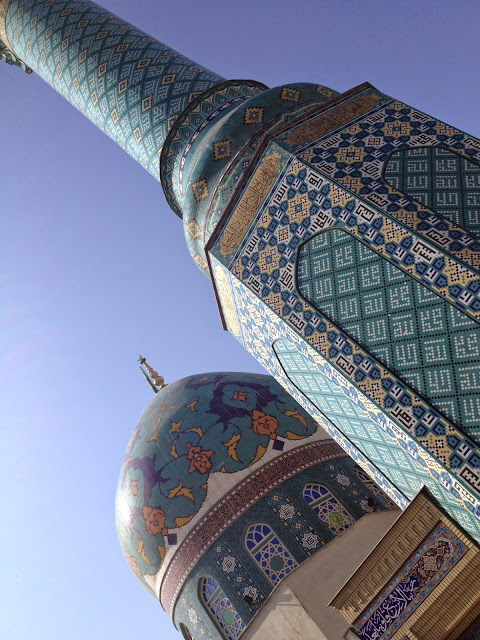 Downtown, I visit a mosque and ask if I can take pictures of the facade. Granted. I see a woman crying openly at a  nearby shrine. I see men washing their feet as they prepare to go inside the mosque. I go to the fruit and vegetable market. Could have been a still from a lonely planet guide book. The colours and the smells - a mix of the smell of nature's goodness in the fruit and the nearby spice shops. I buy cherries and peaches. So sweet. So juicy. All the cliches you know about fruit!

Before I know it, it is time to leave Tehran. An all too brief a stay, but one that lifted the scales from my eyes. It has been a trip in which I expected to write about food, but in the end food was not trivial.  It no longer mattered that I could not access facebook or twitter, or that the internet was frustratingly slow. There have been bigger issues.

This trip in the end was about faces. Voices. Eyes. They all reflected a people with visions of a better a life; a world where traffic congestion was gone; where the air quality was better. I imagined returning again, but seeing more Toyotas on the road, and those ubiquitous American fast food places. Cool and trendy stores like Samsung and hotels with names like Shangri-la and Hyatt. That would mean that the world was willing to welcome back this culturally rich country. See, as a South African I know all about sanctions and how the people are the ones who suffer. I know all about being cast away like some pariah. But at some point, it is no longer about politics. It is about humanity.


I will remember the faces. I will recall the voices of these resilient people, no longer demonised. They are not caricatures. Or labels. They are people. Like you. Like me.