Do you have that comfortable item of clothing that you just can't get rid of? Is there that jeans, for example, that you keep slipping into because it is just to comfortable despite the fact that you have newer ones in the closet or  that you have to suck in your tummy to wear it? Is there that jeans that you wear because you know you look good in it? It is more than just comfortable. You actually like it. You are happy to wear it. This analogy sums up my relationship with Sofra bld at Shangri-la. 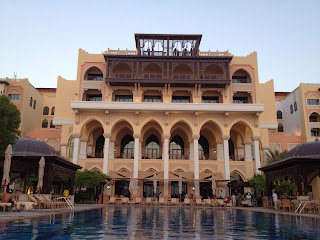 On this occasion I went for their seafood night which is held on a Tuesday. You can expect a lot of the usual favourites here, but this is all about seafood of course. They do a seafood grill that can be brought to your table. Rather than get the entire grill - come on I eat like a bird, I had a variety of smaller dishes.  I started with the caviar which was fresh, but served with rather odd crackers; crackers that seemed out of place next to its more esteemed appetiser partner. Not a good start - pun intended. I followed this up with a sashimi platter. I was impressed when the sushi chef offered to give me fresh cuts of tuna and salmon rather than the pieces already cut. It is disappointing though that the sashimi selection is limited to these. It is also a  pity that one cannot get the plum leaves, called Shiso,  that usually serves as a receptacle for sashimi in Japan. The leaves are crunchy and aromatic - a lovely contrast with the uncooked salmon and tuna. I fell in love with it this past Summer on my trip to Japan.

I followed this up with oysters and rather than lemon, I went with the mignonette vinaigrette dressing, and had a heathy serving. The dressing was fabulous, but unfortunately, the shucking was not done that well and it was a bit gritty for me. In fairness, on only two occasions have I had the most perfect oysters: The Westin's Fairways  and the Shangri-la Lounge, but prepared by the award-winning Bord Eau. After the oysters, I tried the grilled lobster, and this too was disappointing. I suspected it had been pre-boiled and then grilled, leaving it rather dry.

I was left with no choice but to sample the lamb. Yes, on a seafood night. Lamb and mint sauce with sautéed vegetables. Back on track. Finally, dessert is reason enough to visit Sofra (see previous posts). Instead of my usual favourite  of creme brûlée and cheese cake, I opted for the Cheese station. The good run continued as I tried the excellent cheese selection and equally impressive choice of jams and chutneys.

In the end, was it an evening that flattered to deceive? Not at all. Sofra is bigger than a theme night, and while the seafood choices I made were not up to the standard I expected, the whole Shangri-la experience compensated for this. And that is why I keep going back.